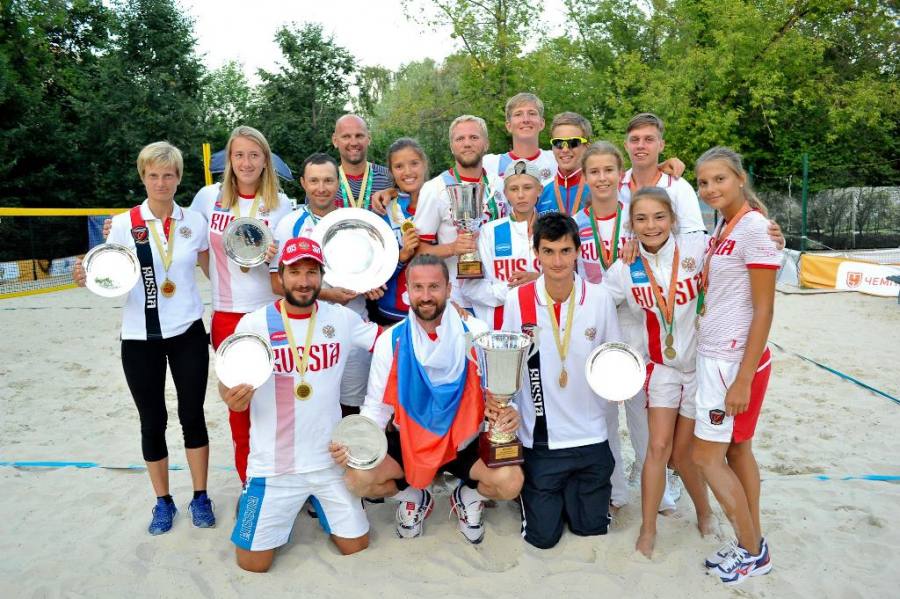 Only three days ago in Italian Cervia was completed Word Championship and already all the best beach tennis-player moved in Russian capital.

This Championship – is seventh consecutive. All these tournaments were in Moscow. It’s fair to say that organization of highest level competitions during so many years is serious contribution of Russia in the development of young tennis discipline.

We can notice such fact. For all previous six years, the medals of World Cup Team won only representative of five countries. Italians got the greatest success is being the founders of beach tennis. They won World Championship four times and twice took second place. If apply Olympic system of the team title definition, so second country in beach tennis is Brazil, it has one gold medal and three silver medals. On third position is Russia, national team of our country one time (2016, on picture) became world champions, one time it was second (2015) and three times – it was third (2013, 2014, 2017). Two times French won bronze medals and one time Spain.

Fourth years at the same time with grown-up, World Cup Team goes junior tournament (U14). On three previous championships, Italians won it and one time it happened in 2017, national team of Venezuela sensationally won the tournament. Brazilians became twice of silver medalist and one time won bronze. Russian team conquered bronze awards in 2016 and 2017.

Dmitriy Vikharev saying about present days and the perspectives of World Cup Team, vice-president of Russian Tennis Federation, who is in charge beach tennis noticed following:

-         Now our main goal – to contribute of international calendar reforms towards of professionalism. In order to ingress to World Cup Team is realized as in the most kind of sports by way of system of selective (continental) competitions. And in the world already appear such competitions. Along with “old-resident” – European Championship, it goes Pan-American and Mediterranean games. Now all of it go on its rules. We as organizers of World Cup want to unify the format of such tournaments.

-         Early years we gained of mass character and in Moscow arrived all the team without any limitations. This was supported by condition of full hospitality. But over time appeared necessity in selection of national teams. And past year we first time organized qualification tournament, the participants were in Moscow at their own expense. This year we brought registration fees in.

-         Festival format allowed collecting maximum number of teams, now it is time to make elite tournament. Championship, on our view, must be like Masters Series, where for awards will compete from eight to sixteen national teams. However, in junior tournament the limitations will not be forthcoming. Format will be unchangeable: one tournament – one week. We suppose it as optimal for beach tennis.

I think in five-six years we must come to separation of grown-up and junior tournaments. For juniors must be its calendar and its rating. It’s not necessary to combine with grown-up competitions.

So, nowadays in main grid will start competition twenty-four national teams. In the first round there are eight seeded national teams, among which is team of Russia, and these teams are free from games. In second round, our team will play with winner of match Moldova – Portugal.

In junior tournament, ten team-participants are divided to two preliminary groups. Russian fell within in Group B with teams of Italy, Spain, Brazil, and Estonia. The winners according to the results of group round will play for title, and second national teams – for third place.

Published in News World Team Championship
More in this category: « Photos from the first day of the tournament Drow & schedule 08.08.2018 »