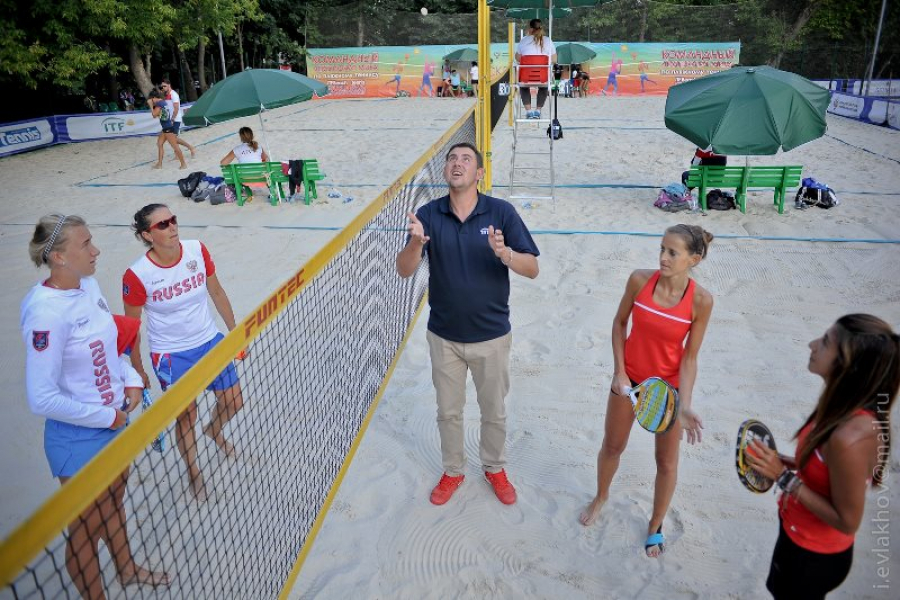 Yesterday, 8 August, in Moscow on VII Beach Tennis World Team Championship were determined all the quarterfinalists.

Today will be matches of quarterfinals where will play following pairs of teams.
Yesterday favorites and current World Champions Italians easily defeated rivals from Cyprus (3:0) and they will play with team of Estonia, who won the day before yesterday the representatives of small insular state Aruba (8th number of standings) with a score 2:1.

One more potential favorite - our national team, on Wednesday won team of Portugal with a score 3:0 (on the picture women's pair Irina Glimakova and Ludmila Nikoyan, who got first point for Russian national team) and it will play with team of San Marino that quite unexpectedly defeated with a whitewash Venezuela 3:0 - fifth team of tournament.

So, it is expecting that in semifinal (of course, if today game is successful) will meet world champions of two previous years – teams of Russia (2016) and Italy (2017). This match could beautify the final of world championship, but one national team will fight for title, another one – only to struggle for bronze medals.

But today Russian beach tennis-players will play with Italians on this Championship. Indeed, it will happen in junior tournament of World Team Championship (U14). Yesterday owners of tournament won its second match of group round, this time won Spanish with a score 2:1 and they lead in Group B after two rounds. It is necessary to notice that main rivals – Brazilians and Italians played less for the match. So the struggle for first place in group allowing to conquer for gold medals, it will be in advance.

In Group A the same situation. Here with two victories lead youth French beach tennis-players. And its main rivals from Venezuela and Germany played only one match, that expectedly won.